LVIT Technology --- What is it and where does it fit into the sensor world?

What is LVIT Technology? LVITs, Linear Variable Inductive Transducers, have been around for more than 30 years, and are becoming very popular due to their relatively low cost and flexibility to be packaged in many different forms. LVIT sensors are contactless linear position sensors that utilize eddy currents developed by an inductor in the surface of a conductive movable element to vary the resonant frequency of an L-C tank circuit. The most common form of an LVIT position sensor uses a small diameter inductive probe surrounded by a conductive tube called a “spoiler” that is mechanically coupled to the moving object. Typical LVITs have full ranges from fractions of an inch to 30 or more inches. Modern electronics using microprocessors and small component size makes outstanding performance possible, achieving linearity errors of less than ±0.1% and temperature coefficients of 50 ppm/ºF, along with either analog or digital outputs. The range of housing sizes for LVITs can be seen in Figure 1 and a cutaway view of an LVIT can be seen in Figure 2. 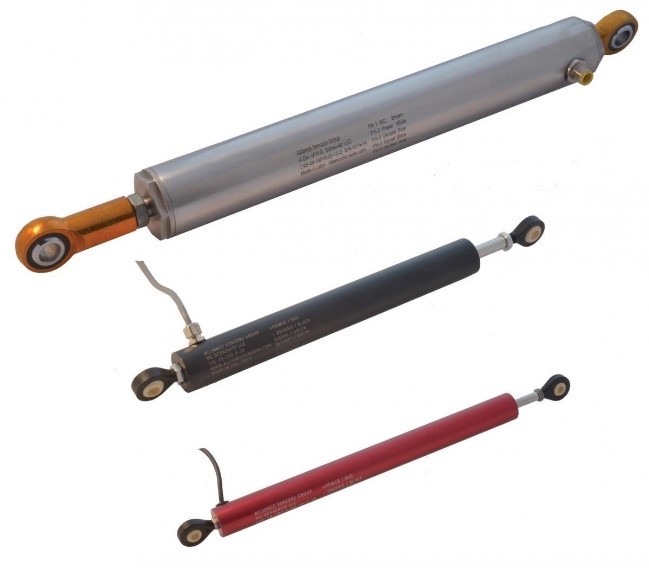 In mobile hydraulics the LVIT sensor is commonly used to measure hydraulic or pneumatic cylinder position. Usually the sensor has a pressure-sealed head and a probe long enough to insert into a gun-drilled hole in the cylinder’s ram. The ID of this hole in the ram then acts as the spoiler. The sensor head can either be port mounted or embedded into the end cap of the cylinder. A typical in-cylinder LVIT installation is shown in Figure 3. 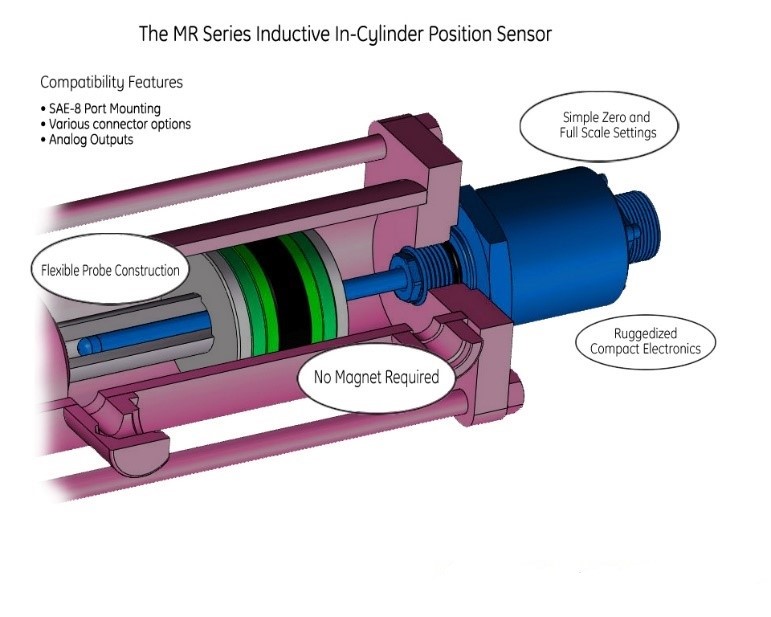 This packaging fulfills many different applications in mobile hydraulics such as bulldozer shovel or snow plow positioning, boom positioning on hydraulic cranes and man lifts, and in a variety of agricultural vehicle accessory position feedback requirements

For subsea cylinder applications involving pumps, chokes, blowout preventers, and ROV-based actuators, the LVIT is designed to withstand the internal and/or external pressures of a PBOF (pressure balanced, oil filled) system. Other technologies commonly used to satisfy these applications require additional hardware like a ring magnet to operate, which adds cost to the machining of the cylinder ram and complexity to the installation. Typical subsea LVITs are shown in Figure 4.

Typical civil engineering applications include measuring bridge expansion and contraction due to seasonal heating and cooling, and related shifts in trunnions and roller support mechanisms. This problem of expansion and contraction is compounded with railway bridges and tracks, where the expansion of a mile-long section of rail could be as much as 4 feet over a change of temperature in some climates of 100 degrees F. This could lead to rail buckling, known in the industry as “sun kink,” and the derailment of a train. In this type of application, instead of having a bare probe protruding from the sensor head, the LVIT’s probe coil, spoiler, and electronics are packaged inside of a cylindrical housing for heavy duty protection, allowing the sensor to be exposed to its environment. The LVITs are connected to the pier and deck of the bridge to measure the relative position of the two, or directly to the rails to measure rail buckling. LVIT technology is extremely robust and so can withstand seasonal weather conditions such as heat, cold, rain, and snow. An example of an installation of heavy duty LVITs on a bridge is shown in Figure 5.

LVIT sensors are used in many factory automation applications, including packaging and material handling equipment, die platen position in plastic molding machines, roller position and web tension controls in paper mills or converting facilities, and robotic spray painting systems. Being contactless, the basic measurement mechanism of an LVIT sensor does not wear out over time. LVIT position sensors do not have the higher installed cost associated with other contactless technologies.

LVITs are being utilized in specific areas of the energy sector. In power generation applications, LVITs are used for valve position feedback, feed water pump displacement, or generator shell movement. In oil fields, LVITs are used in hydraulic-operated pumps that replace Lufkin-style pump jacks, and to measure the poppet position inside check valves.

From the foregoing exposition, it is apparent that LVITs represent a valuable and cost-effective position measuring technology for a broad range of applications.

HGSI’s LVIT product line is offered with the proprietary SenSet™ field programmable scaling, which allows a user to adjust for mechanical variations after installation in the application simply by pushing a button or grounding a connection. This SenSet™ feature reduces setup time and cost of ownership. For example, SenSet™ allows a rising stem valve that opens 9.5 inches to be coupled to a 10-inch range LVIT and get full scale output over the 9.5 inches by scaling the sensor’s output after it has been installed.